skip to main | skip to sidebar

If I was an Iranian….

Part I – The Problem

These days I often come across people who seem apprehensive about the possibility of war between the US and Iran. Your Blogger, being a habitual optimist, likes to believe that what we are witnessing is no more than another example of the Bush Administration’s predilection for sabre-rattling.

Sorely wounded in Iraq the US is currently militarily overstretched and is unlikely to hold any delusions about possible victories in Iran. But then - as your Blogger has often been known to get things wrong - perhaps one should not ignore the possible stratagems of that 60 year-old fly in the Middle East ointment – Israel.

Unlike Pakistan’s nuclear weapons, which are all targeting India (and vice-versa), Irani nukes will destabilize the Middle East and its strategically vital oil-producing areas. While the fabulously wealthy Saudi royalty might end up with jellied knees, the Irani nukes will most likely be aimed at Tel Aviv. And therein lies the problem.

For the sake of self-preservation the Israelis will not allow Iran to possess nuclear weapons and, even if it leads to a breakout of World War III, Israel will make every attempt to destroy Irani nuclear facilities before they get to the bomb-developing stage.

Whatever one might think of the Israel’s leadership, no one can accuse them of stupidity. Rather than attack Iran all by themselves, the Israelis will inveigle Washington to do the job alongside them. At the very least the Israeli bombers will need the US military for mid-air refuelling for a return trip to Iran.

So while Bush shakes a belligerent fist at Iran, he may soon be duped into doing something much more lethal.

Part II – Why are many Iranis such ardent nationalists?


I’m not Irani but I do know something about the history about this neighbouring country. For instance, given my predilection for free-thinking, had I been an Irani in the early 80s there is a chance that I might have been tortured and perhaps even executed by Khomeini’s zealots in the revolutionary guards.

Nonetheless, my aversion to religious extremism would not have stopped me from becoming an enthusiastic Irani nationalist.

Well for the simple reason that Iran has an extremely ancient and proud heritage (much older, for instance, than India’s). Its roots began as early as 728 BC when the Deioces founded the Median kingdom at Ecbatana (modern Hamadan). The Medians were eventually replaced in 550 BC by their cousin tribe the Persians, led by the mighty Cyrus. It was under Cyrus that Iran took the route to global splendour.

While the West is enamoured by the Greeks and the Romans and doomed to read the prejudiced histories written by them, the Persians flourished with religious tolerance and superb competence in administration over an area stretching from Egypt in the west to Sind (modern Pakistan) in the east and all the way north to Macedonia and the Aral Sea. Ancient Empires didn’t get much mightier than this.

The 330 year reign of the Persians was followed by a 140 year rule under Alexander’s Greek Seleucids who soon became wholly Persianised anyway. The Seleucids were replaced by the Rome-beating Parthians, who then gave way in 224 AD to the Sassanians. The fate of the Sassanian dynasty was sealed four hundred years later at the battle of Qadisiyya in 636/637 AD by a victorious Muslim Arab army.

While modern day Muslims glorify the scientific and artistic pinnacles achieved under the Abbasids, few realise that over 75% of the scientists, scholars and artists at the apex of Islam’s historical past were in fact Persians who had embraced Arab/Islamic names.

One should also bring to mind that Farsi literature resounds with such celebrated names as Ferdousi, Rumi, Hafiz, Jami and Sa’di.

Part III – If I was an Iranian why would I distrust Washington?

Now we come to the tricky issue of the distrust of Washington that seems to pervade modern Iran.

The US was a relative international innocent during the heyday of Imperialist power. However soon after WWII it took on the role of a global superpower and it was not long before the US began interfering in other countries’ affairs in a bid to assert its dominance throughout the world.

The watershed moment for Iran took place in 1953 when CIA’s Kermit Roosevelt (President Teddy Roosevelt’s grandson) successfully arranged for the overthrow Iran’s first and only democratically elected Prime Minister Muhammad Mossadeq. In Mossadeq’s place the US securely planted the temperamentally weak and insecure Muhammad Reza as the monarchical dictator of the country.

For the next 26 years the people of Iran suffered under the grip of the Shah’s Sazman-i-Etelaat va Amjiniat-I Keshvar or Savak, which soon became, in Robert Fisk’s words, ‘the most notorious and the most murderous, its torture chambers among the Middle East’s most terrible institutions.’ The noted journalist also maintains that possibly ‘a third of the male population of Iran were in some way involved with Savak, either directly or as occasional paid or blackmailed informants.’

All through the Shah’s reign Savak remained under the tutelage of the CIA. Savak agents were regularly flown to the US for lessons in interrogation techniques. It is therefore understandable that many Iranis who suffered brutally during those near three decades have little love lost for the US.

The 444-day Tehran Embassy crisis was the price that US, the ‘Great Satan’, was made to pay for its 25-year involvement in Iran’s affairs. After the embassy takeover some students laboriously glued together 2,300 shredded US diplomatic papers, some of which deeply incriminated the US in its role of helping perpetuate Shah’s vicious regime.

While the US claimed to be impartial during the Iran-Iraq war, from Iran’s perspective it was anything but. For those unfamiliar with what the US actually did during that period, here are some salient examples:

Throughout the war the Americans provided satellite imagery and other battlefield intelligence to the Iraqis to help them beat Iran.

The US turned a blind eye to Iraq use of banned chemical weapons. (When Saddam killed 5000 of Iraqi Kurds in Halabja, the CIA is on record for sending a briefing note to US embassies deceitfully blaming the Iranis of this war crime).

Twenty-four American warships were sent to the Gulf to protect Iraqi oil shipments from Irani attacks while the Iraqis were given a free hand to destroy any or all of Iran shipments.

Angered by Iran’s mine laying activities in the Gulf US naval ships attacked an Irani minelayer. This was followed by the complete destruction of two Irani oil platforms by four US guided missile destroyers.


These were hardly the acts of a neutral bystander.

The ultimate act of hostility was when the US missile cruiser Vincennes, while assertively sailing within Iran’s territorial waters, shot down an Iran Air Airbus carrying 290 passengers heading for Dubai.

This and further acts of callousness by the Americans left most Iranis stunned. When the Vincennes returned to its home base of San Diego the ship was given a hero’s welcome and its men were all awarded combat action ribbons. The ship’s air warfare coordinator won a naval medal for ‘heroic achievement’. And to top it all the citizens of its namesake town of Vincennes in Indiana raised money to build a monument – not to the 290 dead Irani civilians – but to the ship that had destroyed them.

While your Blogger can hardly be accused of being sympathetic to the Mullah regime of Tehran, he will stress that Iran as a country and Iranis as a people are worthy of respect.

After years of trying interfere with the destiny of millions of Iranis, I find it difficult to perceive how the US can expect any warmth from them.

To my mind the only sensible course of action for Washington is to accept current realities. Pushing Iran into a hostile corner has only made Tehran more determinedly stubborn.

Pakistan’s Musharraf crumbled after a single call post-9/11 telephone call from the US secretary of state. Dictator’s have a tendency of doing just that. While Iran is by no means a democracy, its leadership has to carry the will of its people to some extent. Bullying and browbeating Iran will get their back up.

So instead of routinely vilifying Iran, a wiser course of action is to accord Iran the respect due to a nation state And, to recognize that US actions over the past five decades have directly led to the bitter cultural chasm that exists between the two countries.

It is time to build bridges rather than keep burning them. 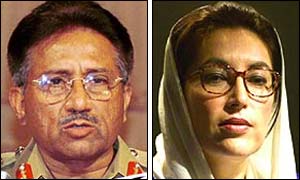 After two months of public utterings from his minions, the man has finally spoken for himself. Musharraf has at long last officially confirmed what had already become common knowledge.

As the Daily Times reported this Tuesday (20th February, 2007)

President General Pervez Musharraf finally told a TV channel yesterday that he would seek re-election by the current assemblies and not by the new assemblies after the 2007 general elections.

One can surmise that the talks between Musharraf’s intelligence agents and Benazir Bhutto have reached a stalemate.

Browbeating her with the Swiss money laundering case, Musharraf evidently believed that he would eventually get his way. Sadly Benazir would have quite likely conceded on the General’s ‘Uniform Issue’ but the idea of a surrogate prime minister from the PPP proved a bridge too far – the idea is an obvious anathema to her.

Military rulers traditionally exploit the weaknesses of the political forces and attempt to divide and fragment them. Not surprisingly therefore one of the conditions believed to have been imposed on Benazir for the continuance of these secret parleys was that she would abstain from participating in any opposition roundtable meeting.

Consequently it does not come as a surprise that for weeks Benazir had been prevaricating on the subject of attending the Nawaz Sharif organized opposition summit in London. Suddenly all this has changed.

As your Blogger adamantly maintains, there is no such thing as a coincidence in the murky world of Pakistani power shenanigans.

So the day that Musharraf finally came clean about his re-election plans on TV was the very same day it was announced that Benazir Bhutto and Nawaz Sharif would co-chair the March 24-25 all-party conference in London.


In common with all military rulers Musharraf has come to enjoy the trappings of power and has no intention of letting go. Rumour has it that the grisly model of Hosni Mubarik, who has reigned over Egypt since 1982, is one that he wishes to emulate. Sadly for Musharraf, your Blogger stoutly contends that the Pakistanis will not prove to be as compliant as the poor downtrodden Egyptians.

As Dr. Hasan-Askari Rizvi noted nearly a month ago in the Daily Times:

If President Pervez Musharraf opts for this strategy, in total disregard of constitutional and ethical considerations, Pakistan will be faced with a head-on collision between the pro-and anti-Musharraf elements.

Such a confrontation will undermine the political interests of both General Pervez Musharraf and the opposition. It will also have negative ramifications for Pakistan’s political credibility at the global level.

Five years ago, Musharraf orchestrated a farcical referendum to prolong his self-imposed presidency. Now he is insisting on another ludicrous scenario whereby the present outgoing national and provincial assemblies ‘will re-elect’ him to a new five-year term as president

To my mind seven years of military rule has created a pressure-cooker environment. What Pakistanis (with the exception of the profiteering elite) require is a safety valve. If it is not given to them via the ballot box, there is a looming prospect of violent urban disturbances.

Pakistan
Posted by A Different Drum at 12:08 am 4 comments:

A Different Drum
Just an ordinary citizen who desperately wishes to make Pakistan a safer and a better place for our children and the generations that succeed them.